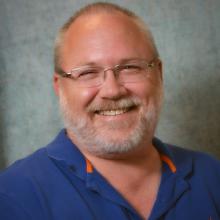 I began my IT career in 1978, in high school, where I began to learn programming languages on the IBM 360 mainframe and Apple ][ desktop computers. Upon graduating, I attended San Jacinto Junior College, just outside Houston, Texas, where I continued my programming studies on the Osbourne 1 computer. Due to financial difficulties, I was unable to finish my schooling and joined the U.S. Navy.

While in the Navy, I learned about circuit design and troubleshooting, most specifically for RADAR systems. I became an Electronics Technician.

After leaving the Navy, I worked in industry for approximately 25 years in many different capacities, including PC break/fix technician, system administrator, network administrator, programmer and consultant.

During the economic downturn, I was laid-off. Due to the lack of any college degree or professional certification, I was unable to find any meaningful work. As a result, I returned to college in 2011 where I attended EMCC's Red Hat, Cisco, and VMware Academies. I graduated with two AAS degrees in 2012, both with highest distinction.

While attending EMCC I accomplished many things, aside from earning degrees:

After I graduated in 2012, I went to work at SMCC where I continued to be an adjunct instructor, a systems administrator (professional staff), course developer (Cisco capstone and Linux classes), and tutor.

Along the way, I earned the Cisco Certified Network Associate - Security, CompTIA A+, CompTIA Linux+, and NSA CNSS 4011 certifications.

I was hired at EMCC in January 2016 as a Computer Information Systems residential faculty, where I teach all of the Red Hat Academy's Linux classes as well as some Cisco classes.

During the summer of 2017, I earned the Red Hat Certified System Administrator (RHCSA) professional certification.

During the summer of 2019, I earned the Red Hat Certified Engineer (RHCE) professional certification.

During the summer / fall of 2021, I finally finished my Associate of Arts degree and AGEC. Beginning Fall 2022, I am taking classes at Northern Arizona Univeristy.

People in this department: